In the last days of 2011 I read an review about the Nokia Lumia 800 from a respected blog. The writer wasn’t very thrilled about the device and kept saying how his BlackBerry, iPhone and iPad were way better devices than the Lumia 800. In my opinion the review was poorly written and it was obvious that the writer had made his mind about the device even before picking it up for the first time. After reading the review, I knew that I had to test the device myself. So about five minutes after reading the review I ordered myself a Lumia 800 from Amazon and three days later the device arrived. 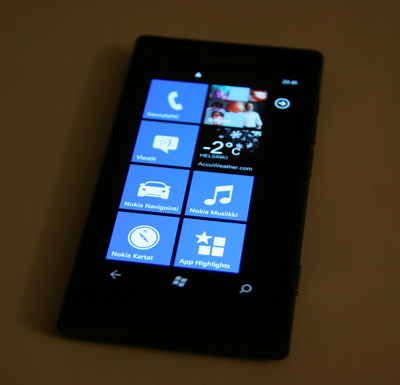 I’ve now used the device for two weeks and I like it a lot. Before the Lumia 800, I used Samsung Galaxy S as my primary phone. The Galaxy S is quite decent device, not very spectacular in any way, but quite ok. The Lumia 800 on the other hand is very beautiful device with an operating systems that doesn’t try to copy everything from others. If I had to describe Windows Phone 7.5 to an Android or iOS user, I would describe it as different. All the gestures and interactions with the screen components are familiar but the layout and the UI flow is new. I really like that it’s different, the last thing we need is another grid based OS which does the same thing as all others. The main menu with the tiles is nice, althought it is a bit of a gimmick, but still it’s a fresh idea.

In the two weeks that I’ve used, I haven’t noticed any major issues with the phone or the operating system that would have made me switch back to the Galaxy S. There’s a lot more apps available to the device than I initially thought and the bundled Nokia software are a nice addition. I did have some issues when synchronizing GMail contacts to the phone, i.e. the phone couldn’t handle invalid data, but I sorted it out by going through the contacts one by one. Some small things I miss from Android, for example turning the volume down doesn’t turn the vibration off, but these are small things that hopefully Microsoft fixes with the Tango or Apollo updates.

Overall it’s a good phone and an accomplishment from Nokia to get it out so quickly.